A revolutionary poet has moved on

To use the boxing cliché, the poet has “thrown in the towel”. Jack Hirschman was a fighter who never gave up, but on August 22, 2021, there was no revival for the poet, activist and cosmopolitan with the classic walrus mustache and the Haight Ashberry hair-do. In San Francisco, where Hirschman has lived since 1973, he and his Swedish-born wife, poet and artist Agneta Falk, belonged to the bohemian community that used to gather for a double espresso at Cafe Trieste or for a reading at one of the alternative galleries in North Beach.

Notwithstanding his long-lasting close friendship with Lawrence Ferlinghetti and their association at the legendary City Lights Bookstore and Imprint, so central to the “Beat Poets”, Hirschman preferred to call himself a “working class labour poet”. For him, it was more important to be involved in the Anti- Vietnam War Movement and The National Union of the Homeless than to pursue an academic career. He studied Latin and Greek, Russian came with breast milk and Italian became a much-loved further tongue, not least in terms of the many volumes of translation that passed from Jack Hirschman’s desk. Despite his Marxist and activist commitments, he was named poet laureate in San Francisco, in 2006, a much criticized yet respected and beloved poet. In large measure thanks to him, an excellent reading diction has been embraced by many contemporary American poets.

That Jack Hirschman was born in New York and this heritage could be heard in his voice throughout his life, as well as his multicultural heritage – from Europe, Russia and Jewish culture. Thus for him there were many natural language sources to draw from. He initially wrote in Russian and translated the texts into English himself.

He himself said that he was not born a communist, but that he became one because of what he saw and felt. His outspoken commitment to the cause led to his dismissal from UNCLA (University of Los Angeles, 1966). His youthful enthusiasm is illustrated by the fact that he wrote a letter to Ernest Hemingway himself who replied: “I cannot help you kid. You write better than I did when I was 19. But the hell of it is you write like me.”

As his poetic peak, his work The Arcades comes to us in two books of 1000 pages apiece and in a third volume of 500 pages. Among the more than sixty books he authored during his lifetime are titles such as A Correspondence of Americans (1960), Shekinah (1969) Cantillations (1974), Lyripol (1976), The Bottom Line (1988), The Back of a Spoon (1992). Several of these were published by City Lights Books, but most of them (in pamphlet form) by underground publishers. A representative selection of poems can be found in FRONT LINES (2002, City Light Books).

Not least through his creative poetic work in the area of translation, Jack Hirschman has contributed to the oeuvre of poets such as Artaud, Mallarmé, René Depestre and many others.

Through the decades, Hirschman has been in contact with other prominent writers and poets, from Hemingway to Charles Olson and the Beat Poets, including Allen Ginsberg. He also worked alongside filmmakers and other visual artists as a performing artist.

During several poetry festivals around the world, I had the pleasure of meeting Jack and Agneta, who have become something of Bonnie & Clyde team at these events. Despite their advancing years and some physical difficulties, they were always in good spirits, even after long flights and cumbersome means of further transportation were negotiated. In his own way, Jack was a paradoxical person in that he combined a very strong political radicalism with a warm and tender mindset. His gaze reflected both the boy’s sprightliness and a mature reflective life experience. When he raised his voice at the dinner table, or on stage, there was a seriousness mixed with nuance, subtlety. He recited his poems much like the Russian Thaw Poets had done for crowded stadiums in the late 1950s. One such was Yevgeny Yevtushenko, best known for his poem about the massacre of Jews in Babij Jar.

At a poetry festival, in April 2016, FIP LIMA in Peru, a grandmaster meeting takes place, (a duel that does not end): Jack Hirschman from the United States and Yevgeny Yevtushenko from Russia, both born in the same year, 1933.  There is something that does not gell between them, two men who should have so much in common – a Jewish, American communist and a cosmopolitan Russian poet who in his younger days had been much hailed in his Soviet homeland.

Is it possible to say that one’s experience from a social system corresponded to the other’s from the diametrically opposite perspective? Was there nothing to mention about the theme of dream and reality? At the end of Chapter 3 of Confessions of a Child of the Soviet Century, Yevtushenko writes: “Contrary to these critics, we sought to show the possibility of conflict between good and evil. In the end, we also won this battle. But it did not happen at once. Much still needs to be done to understand how dangerous and non-communist this optimism really was.”

The World Poetry Movement pays tribute to Hirschman in October. During the Vietnam War, JH was fired from UCLA for his critical attitude to the war and since then he has worked relentlessly in poetic activism on various levels, not least through the “Street Poetry” that reached all kinds of people, including the homeless. The Homeless Union and the People’s Tribune became a natural context for the activist who was to be awarded the American Book Award for Lifetime Achievement, 2002. As a sworn communist, he was a member of The League of Revolutionaries and worked as a solidarity fighter in all possible contexts. Sometimes it could be in the area of immigrants’ rights, police brutality, unemployment or homelessness. And in the Union of Left Writers’ Collective, he had a basis for his international networking through translation work and personal contacts. In 1980, he joined The Communist Labor Party with the motivation: “It is what I have seen and experienced that has made me a communist.”

He wrote more than a hundred books in his own name, translated poets such as Mayakovski and co-founded the World Poetry Movement. Despite various physical ailments, he was active to the last, both at home in North Beach, San Francisco, and as a participant in poetry festivals around the world.

His greeting, “Welcome to the planetarium”, was a phrase he coined. The “planetarium” is the world consciousness which, despite all the conflicts and borders, sees that it is the many, we human beings, who make the world go round day by day: we all belong to the same race, community, now more than ever, which means that we hold the life of this planet life in our hands.

What is so unique about Jack’s poetry? It is characterized by a spiritual dimension, which is contained in his dialectical thinking; this in turn is forward-looking on both a personal and political level. Jack was both tough and sensitive. He believed that every human being could be poetic and had the right to express dreams of beauty and the desire for brotherhood. With his words brimming with passion, empathy and humour, he fought on the front lines of love and hope.

Poems of Love, Hope and Peace

More than 1700 poets and artists in the 26 editions so far, dozens of free events every year: readings, performances, concerts, screenings, 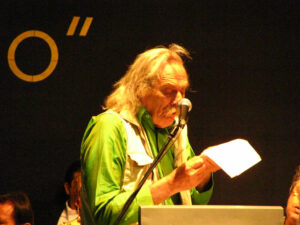 We present one selection of poems by Jack Hirschman, as part of the tribute that WPM is developing in October 2021, in memory of his creative and revolutionary life.