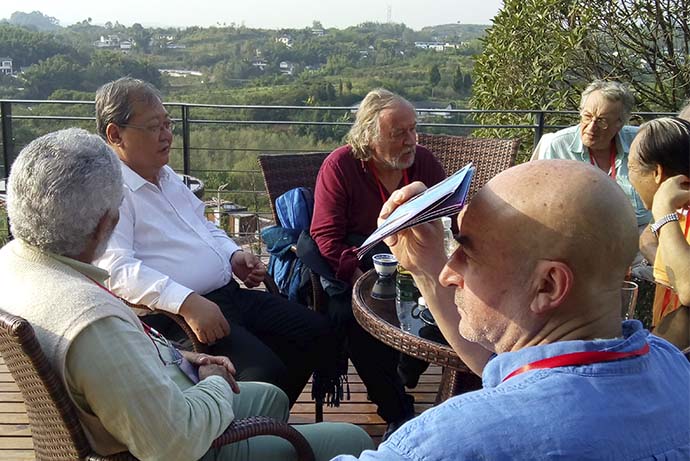 “September 21st and 25th, the “Belt and Road International Poetry Week: Beacon of the Word” was held in Zigong, China, an international poetry meeting organized by the Chinese Writers’ Association, the Federation of Literature and Circle of the Arts of Zigong and the People’s Government of the Ziliujing District”.

A punctual and delicate organization took care of all the details to allow us to be protagonists and witnesses of days of privileged reflection, of unforgettable days in a great country. The meeting was in the city of Zigong, Sichuan Province. From September 18, the guests began to arrive at the Tan Mu Lin Celebrity City Hotel. From there, the programmed activities were coordinated, social and work meetings were held.

On Friday, September 21st, in the evening, after a visit to iconic places in the city of Zigong such as the Salt Museum and the Lantern Museum, the first WPM meeting was held in the lobby of the Tan Mu Lin Celebrity City Hotel.

Fernando Rendón, general coordinator of WPM, presented a report on the organizational process of the Movement after seven years of existence, which has allowed it to develop 13 global poetic actions, in which 3,041 actions have been organized in 108 countries on five continents. He also presented the achievements in the communication processes with the publication of the Poetry Planet newsletter, the website and the Facebook page, and made some recommendations on the organization’s plan of the Movement.

Then, each one of the attendees presented a summary of what was done and their expectations with the meeting and with WPM.

Rati Saxena expressed that he considers that people need poetry. For her the actions of WPM in India are very important because they are the way to go against the religious fanaticism that is installed with great force in India and in the world. Every day it is more difficult to be critical there, banalization and hatred are encouraged. Poets and writers have been murdered, imprisoned, assaulted.

She thinks that there is much to do with poetry, exposes the example of publishers who are producing small books of 30 to 60 pages with poetry classics to spread the traditional poetry, and the need for new poets to be known by similar means and that good classical and modern poetry, circulate and proliferate everywhere.

Alex Pausides says that in Cuba there is a great need for poetry, with UNEAC has held eight national and three international festivals and reach many provinces where reading and writing are stimulated. They have also had a strong job on television since they have been offered a space on national television. Now they have better infrastructure, there is an office where UNEAC, the Sur Collection and the International Poetry Festival of Havana work together. In the 2018 La Havana Book Fair had an important Chinese participation, thanks to this exchange a joint publishing project has been launched that has allowed them to publish anthologies of Chinese and Cuban poets to be distributed to the readers of those countries.

Francis Combes says that in France and Paris the situation for poetic projects is quite difficult, politics does not help the proliferation of poetry. The Festival and his work have been hit in the economic aspect by the government that does not finance it anymore. He also expresses that there is a strong rise of good young poetry with a social conscience. It shows the interest expressed by young poets for social causes and the quality of good poets less individualistic. Francis is gathering them to strengthen the poetic work in that country.

Keshab Sigdel says it’s an honor to be in this meet. He presents the Nepali political situation and the new panorama with the change of government. In spite of this, democracy is scarcely developing and there are many problems for freedom of expression and the cultural influence of the United States is felt strongly. As a result of this there is an explosion of young poetry that they are forming and reading. The Writers Association is very active, meets frequently and has monthly publications.

Jack Hirschman reports on his work with the four Revolutionary Brigades that operate in the United States and Italy that permanently carry out poetic actions and has joined those convened by WPM. Even the Italy revolutionary Brigade has been imprisoned. He also says that they have an editorial project with which they have published several poetry world anthologies. He is happy with the interest shown by Jidi Majia in WPM, which he considers is the most important thing for which it is possible to work since it is a revolutionary project.

Mohammed Al Nabhan reports that he has worked mostly in Bahrain and Canada. In the Arab countries it is quite difficult to organize actions and festivals, despite this they have organized the in cafés and galleries. The strongest action was the one that was carried out against the war in which many poets participated and there was very good attendance. He has translated and published in his publishing house the new Arabic poetry, world classics, new poetry from several countries and anthologies to Arabic. They have found a way to market it although the translation work is carried out voluntarily. He offers to contribute to the Movement in the design of a more dynamic new image, in the development of the web that will be more visual and works well in movile devices and also so that there is content in several languages.

The second meeting of the Committee was held, during lunch, at the Tan Mu Lin Celebrity City Hotel. Fernando Rendón spoke about the financial situation suffered by festivals and poetic projects, and the attacks suffered by their political independence and to promote critical and creative thinking. He mentions the attack suffered by the International Poetry Festival of Medellín by the Ministry of Culture, which sought to eliminate the annual contribution and the massive response received by the support campaign that was carried out. It is agreed that the Movement should act jointly to protect festivals and poetic projects in the world when they are attacked by national and local governments. Fernando Rendón proposed the creation of a global financial fund to protect poetry projects and organizations in the world.

There was talk of the need for each member of the Committee to have more initiatives to develop the work as coordinator of their continents, and to develop WPM in the trips that are made, calling new members to extend the influence of WPM. It was agreed the need to grow the Coordinating Committee with more poets to support the work of the coordinators that already exist in each continent, also the importance of involving young poets. It was also agreed to continue strengthening national coordination. All this work will reinforce the movement and allow it to grow continentally and locally.

It is approved that they enter the CC of WPM, Oscar Saavedra (Chile), Magdalena Camargo (Panama) and Khalid Raissouni (Morocco).

The coordination of America is made up of Fernando Rendón, Jack Hirschman, Alex Pausides, Oscar Saavedra and Magdalena Camargo.

Ataol will dialogue with the poets in his area of ​​influence, as will Rati, Francis and Jack.

The discussion was raised as to whether only well-known poets should be part of WPM and it was made clear that there are popular artists and poets who, with generosity and without individualism, promote poetry by making the work and influence of WPM stronger.

It was agreed to produce a Manifesto on a world without walls that Francis will write and present to Jack, Fernando and the others, and a statement of the China´s meeting.

There is talk of the urgent need to hold a meeting with Jidi Majia that will allow us to make progress in strengthening China’s participation in WPM. It is suggested that everyone be attentive for a meeting at 7:30 p.m.

On the night of Sunday 23 the meeting with Jidi Majia is confirmed. He announces that in China there are five International Poetry Festivals organized by the Association of Writers of China.

He said that China respects the autonomy of each nation. They know that the people want to live in peace. In spite of this, at present the world is not a peaceful place and there are many dangers nowadays, for that reason he thinks that it is the time of the poetry, since although it cannot stop anything, it can move very powerful forces in the people.

The voice of poetry is needed and it is important to take it to the people. It is easy for poets to find consensus and promote peace. Different meeting points can be found by poetry. WPM has an important role for humanity today. From China he follows the work that the Movement carries out and thinks there is much to be done.

He announces that after this dialogue he will seek to associate the festivals of China and the poets of his country to WPM. He stated that he will work jointly with the WPM coordinating committee to carry out a world poetry anthology with poets from 200 countries that can be translated into seven central languages ​​(Chinese, Spanish, English, French, Arabic, Japanese, Russian, Hindi). He will also work together in a monthly newsletter for the world. Fernando invites him to be part of the WPM´s Coordinating Committee and participate in the periodical chat, and Jidi Majia says that he will be willing to correspond to the calls. 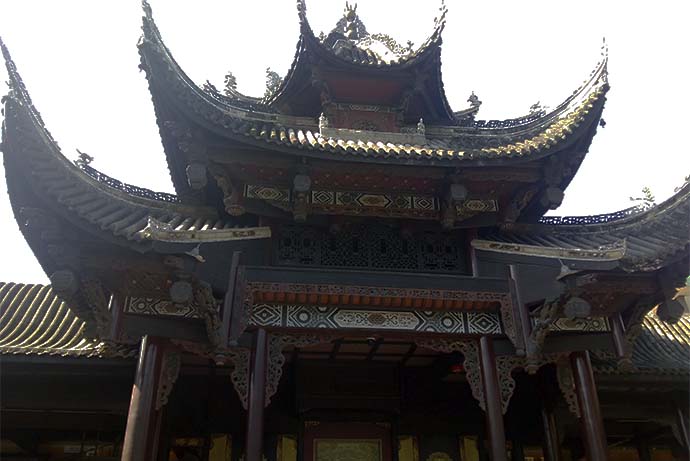